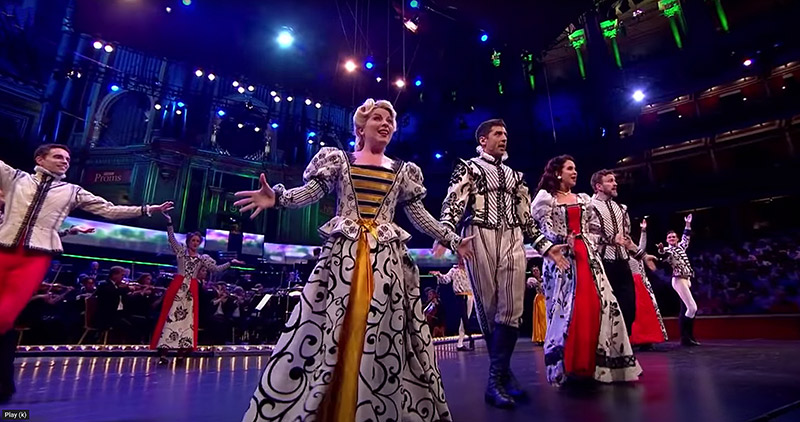 On a normal night in New York, we are lucky to have hundreds of entertainment options available — classical music, jazz performances, stand-up comedy, improv, dance, and, of course, Broadway shows.  We all feel like “fish out of water” these days, but you can go to a Broadway show tonight, with some great music and terrific talent.

April 23rd is the day we observe Shakespeare’s Birthday, so you might want to celebrate with this comedy that mixes the basics of the Taming of the Shrew with the backstage love/hate story of the leads Lilli Vanessi and Fred Graham. With clever, elegant music and lyrics by the inimitable Cole Porter, this show is filled with thrills, chills and spills as well as driving dance music, such as “Too Damn Hot.”

In 1949, it won the first Tony Award for Best Musical. A stellar cast and particularly fine lead actor/singers make this performance of Kiss Me, Kate one of the best ever. This production was performed as part of the PROMS series in Royal Albert Hall.

In celebration of Les Misérables’s 10th Anniversary, the PROMS put together a dream cast at London’s Royal Albert Hall. Enjoy the show in the highest quality audio and video possible. This particular version of the musical is breathtaking. Based on the monumental book by Victor Hugo, the story is about the struggle for “Liberty, Equality, and Fraternity” after the French Revolution. Cast includes Colm Wilkinson as Jean Valjean, Philip Quast as Inspector Javert, Michael Ball as Marius Pontmercy, Lea Salonga as Éponine, Judy Kuhn as Cosette, Ruthie Henshall as Fantine, and many others. 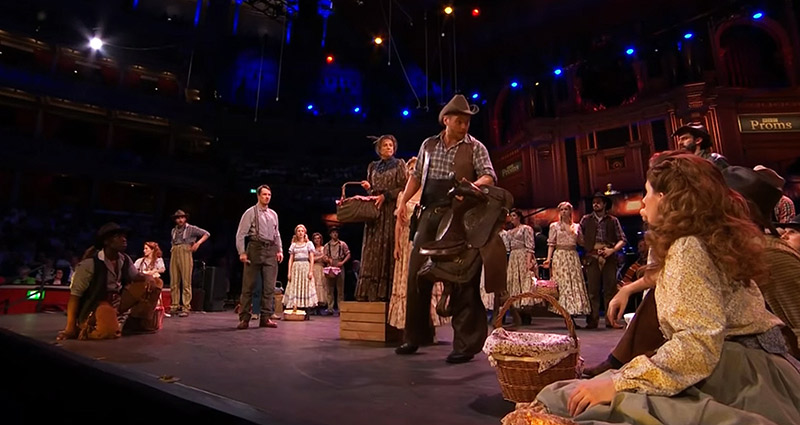 Performed as part of the PROMS series in Royal Albert Hall, this landmark American show has rarely seemed as fresh. A young cast with great voices and exceptional dance skills tell the story of love in the Oklahoma territories, with the beautiful music and lyrics of Rogers and Hammerstein. The choreography is thrillingly breathtaking. The musical was a box-office smash when it first appeared in 1943 and ran for an unprecedented 2,212 performances, later enjoying award-winning revivals, national tours, foreign productions and an Oscar-winning 1955 film adaptation. Rodgers and Hammerstein won a special Pulitzer Prize for Oklahoma! in 1944.

Spring Awakening is a rock musical based on the 1891 German play of the same name by Frank Wedekind. Set in late 19th-century Germany, the musical tells the story of teenagers discovering the inner and outer tumult of teenage sexuality. In the musical, alternative rock is employed as part of the folk-infused rock score. The original Broadway production won eight Tony Awards, including Tonys for Best Musical, Direction, Book, Score and Featured Actor. The production also garnered four Drama Desk Awards, while its original cast album received a Grammy Award. In London, it won four Laurence Olivier Awards, including Best New Musical. 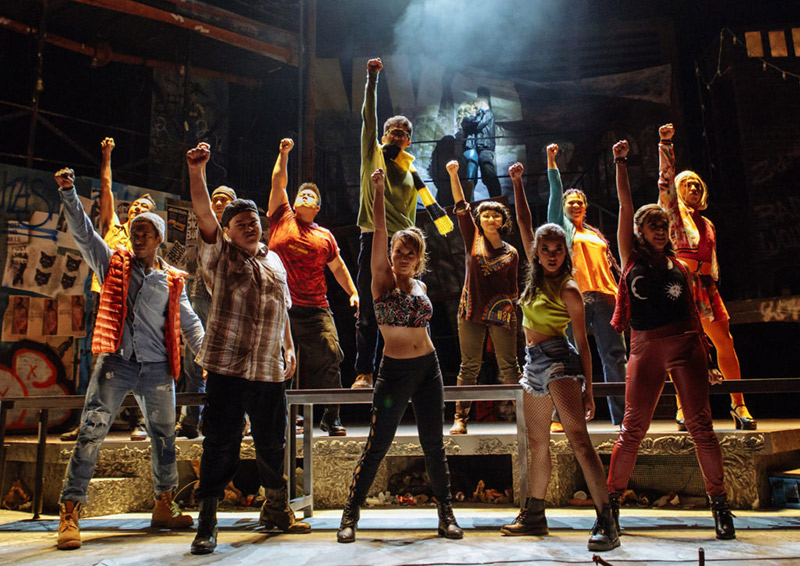 This PBS Great Performances presentation was filmed at the last performance of the original production, and it captures the energy of this modern retelling of La Boheme. In 1996, this original rock musical by a then little-known composer, Jonathan Larson opened on Broadway and forever changed the landscape of American theatre. Speaking to audiences across generations, this Pulitzer Prize and Tony Award-winning masterpiece follows an unforgettable year in the lives of seven artists struggling to follow their dreams without selling out. With its inspiring message of joy and hope in the face of fear, this timeless celebration of friendship and creativity reminds us to measure our lives with the only thing that truly matters: love. Its message seems keenly relevant right now.

Passion is the riveting one-act musical, with music and lyrics by Stephen Sondheim and a book by James Lapine. The original cast, appearing in this film, starred Jere Shea as Giorgio, Donna Murphy as Fosca and Marin Mazzie as Clara. The production was filmed shortly after closing and televised on the Public Broadcasting Service series American Playhouse on September 8, 1996. The musical ran a total of only 280 performances, making it the shortest-running musical ever to win the Tony Award for Best Musical. For those who know this musical, it isn’t your typical My Fair Lady, but it is one of the most moving and beautiful musicals ever written and composed, and this incarnation presents it to great advantage with Murphy and Mazzie’s gleaming performances.

The Sound of Music

What needs to be said about the The Sound of Music?  This emblematic musical is an all-time favorite with just about everyone. With music by Richard Rodgers and lyrics by Oscar Hammerstein II, it is based on the memoir of Maria von Trapp, The Story of the Trapp Family Singers. Set in Austria as Hitler was rising to power in 1938, the musical tells the story of Maria, who takes a job as governess to a large family while she decides whether to become a nun. She falls in love with the children, and eventually their widowed father, Captain von Trapp. He is ordered to accept a commission in the German navy, but he opposes the Nazis. He and Maria decide on a plan to flee Austria with the children. Many songs from the musical have become standards, such as “Edelweiss,” “My Favorite Things,” “Climb Ev’ry Mountain,” “Do-Re-Mi,” and the title song, “The Sound of Music.”

We think you will truly enjoy this particular version. It is a filmed presentation by the La Guardia High School for the Performing Arts — our hometown high school for the arts. And there are no excuses to be made for this performance – fresh and pretty fabulous for those who have yet to tread the boards down on Broadway. Take a look at what these young people are up to; it is astounding.