The Townsend Building was built simultaneously with the St. James. Both buildings express very different but wonderful designs because they were created by noted figures in the history of architecture — design leaders of their day. Cyrus L. Eidlitz, who designed the Townsend in a more retrained classical style than the exuberant St. James, was the son of an influential New York architect, Leopold Eidlitz, one of the founders of the American Institute of Architects.  Cyrus was educated in New York, Geneva, Switzerland and Stuttgart, where he studied architecture at the Polytechnic Institute.

Eidlitz is noted for several important buildings, including the Buffalo Library (demolished), the Dearborn Railroad Station (demolished), and the Association of the American Bar of the City of New York at 42 West 44th, which is still occupied by its original occupant — an oddity in New York.

However, he is probably best known for designing One Times Square, the former New York Times Building on Times Square. When the Times moved from Park Row to 42nd Street in 1905, the square was known as Longacre Square, but Eidlitz’s building would eventually give its name to the square.  The building, where the ball has dropped on New Year’s Eve since 1907, was resurfaced in 1963 and has been covered with signage for decades, but the original building is still under there somewhere. 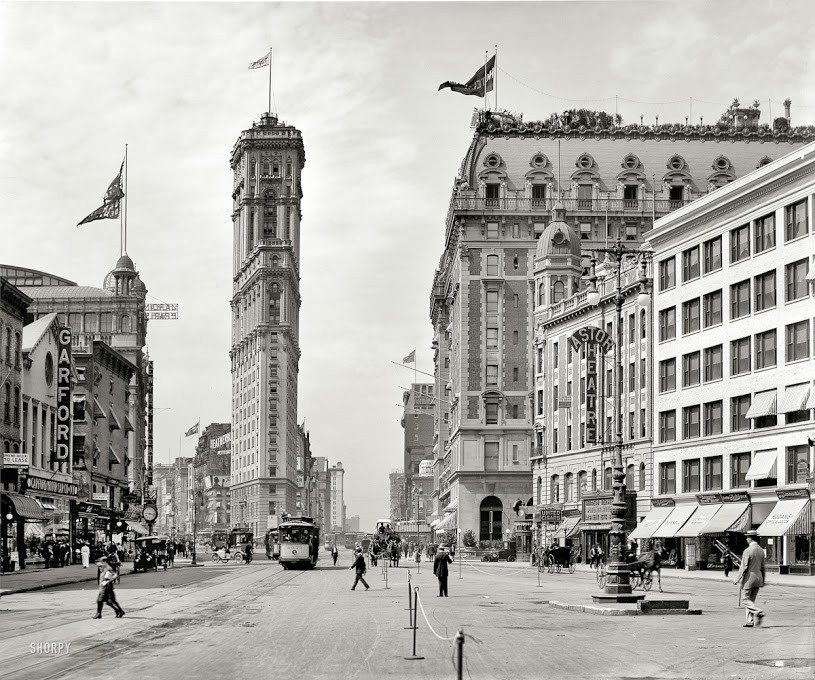 In many ways, just as impressive as these architectural gems are the influences Eidlitz had on the building industry. Eidlitz partnered with structural engineer Andrew C. McKenzie in 1900 to form one of the first firms to put architecture and engineering on an equal footing.  It was the ideal team for its day, because new challenges were appearing all the time — such as building the Times building on an incredibly small slice of property (only 4,000 sq. ft.) over subway lines.  Not only did they create the second tallest building in the city at the time, but also they connected it to a subterranean infrastructure, incorporating the subway stop being built underneath into the basement levels.

Their dual expertise also allowed them to be pioneers in a completely new category of building — the telephone building, something that the firm and its successors would be known for down to the present day.  Their Bell Laboratories building at 463 West Street was for a time the largest industrial research center in the United States. It was listed on the National Register of Historic Places and further designated as a National Historic Landmark.

Many early technological inventions were developed in the Bell building, including automatic telephone panel and crossbar switches, the first experimental talking movies (1923), black-and-white and color TV, video telephones, radar, the vacuum tube, medical equipment, the development of the phonograph record and the first commercial broadcasts, including the first broadcast of a baseball game and the New York Philharmonic with Arturo Toscanini conducting. It served as the headquarters for the company from 1925 to the early 1960s.  The site was also the home for part of the Manhattan Project during World War II, and shortly after the war, the transistor was invented here. Richard Meier refitted it in 1970 as the Westbeth Artists Community.

Eidlitz withdrew from the firm in 1910 and died in 1921, but the firm he began with McKenzie would march on through many changes of partnerships over the century.  During these years, the firm became noted for its particular expertise in the technical building field, creating many new Bell buildings, the outstanding deco-styled Western Union Building at 60 Hudson Street, Columbia’s School of Engineering, and The Goddard Space Center, to name only a very few. Today, Eidlitz’s firm still exists under the name of Haines, Lundberg & Waehler (HLW), and its ancestral line is clear.  Just a look at recent projects noted in Wikipedia confirms the firm’s deep involvement with technical buildings and their challenges:

“Exactly 100 years after the firm’s beginning with a commission to design the first telephone building in New York, a new project for NYNEX Corporation was initiated . . . the firm (HLW) has extended to broadcast, film and television industries. For Fox Studios in Los Angeles, HLW created a 50-acre . . . campus that housed the first fully digital network broadcast center.   Additional 21st century work include the United Nations Secretariat Building and . . .  and Google’s East Coast Headquarters at 111 Eighth Avenue.”

The gentleman who designed our building left us and the world quite a legacy.