Madison Square Park is getting ready for one of its biggest event of the year—and now is your chance to get in on the action. Tickets are now available for Celebrate Mad. Sq. Chefs 2019, to take place rain-or-shine on Tuesday, July 16 from 5:30 – 8:30 p.m.

Each year, Celebrate Mad. Sq. Chefs gathers neighborhood chefs for a food-tasting event foodies look forward to all year, accompanied by some of the finest artisanal cocktails, craft beers and wines available. This year’s event has an amazing chef list that includes stars such as Philippe Massoud from Ilili, Michael Nogera from Eataly, Jorge Espinoza from Scarpetta, and Daniel Humm from Eleven Madison Park and The NoMad, among many others. Providing the live music this year will be The Barnstorm, the high-energy pop/rock/country/hip-hop/dance band that wowed the crowd at last fall’s Parktoberfest.

Proceeds from Celebrate Mad. Sq. Chefs go to support Madison Square Park Conservancy’s horticulture, maintenance and free public programs. General entry tickets are $250, which gets you into the celebration at 6:30 p.m.—or buy an early entry ticket for $350 for admittance, at 5:30 p.m. Multi-ticket packages are also available.

Don’t miss the opportunity to enjoy one of the best nights of the year at Madison Square Park, while ensuring the continued excellent upkeep and programming of the park. We’ll be at Madison Square Chefs 2019, and we hope to see you there. 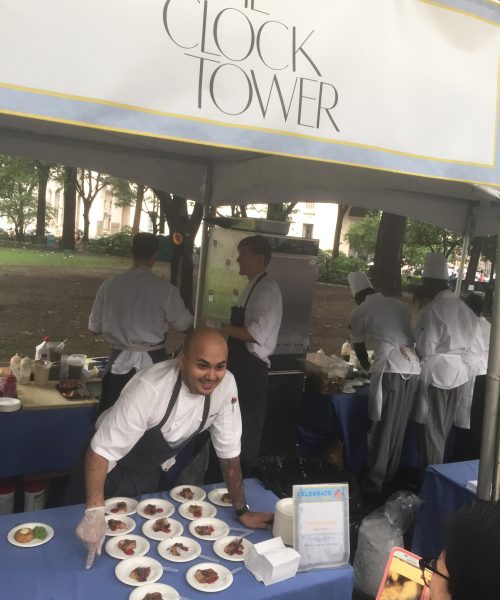 This year’s participants at Celebrate Mad. Sq. Chefs are: