Now and Then is a series of articles appearing regularly on our blog to make tenants aware of the rich and colorful history that occurred on the streets of our Manhattan neighborhood. Once the center of New York social life and national political life, our neighborhood witnessed some of the epic events, firsts, building projects, and celebrities that signaled the beginning of U.S. power and influence.

The oldest United States corporation is located at the corner of 29th Street and Fifth Avenue.   Remarkably it’s not a multinational corporation, a large oil company, or sprawling railroad; it is “America’s Hometown Church”—Marble Collegiate Church.

In 1628, four years after the founding of the Dutch colony of New Amsterdam, Reverend Jonas Michaelius arrived from Holland to organize the Dutch Reformed Church (now known as the Collegiate Church). The first worship service was conducted in a gristmill on what is now South William Street, when the entire population of the city was less than 300. The first church elder was Governor Peter Minuit, who had recently purchased Manhattan Island from the Native Americans. Peter Stuyvesant, Director General of New Amsterdam, led worshippers to Sunday service.

When the British took over the city in 1664 and renamed it New York, they allowed the Dutch Reformed Church to continue its worship traditions. King William III granted the church a Royal Charter in 1696, making the Collegiate Church the oldest corporation in America. It is also the oldest Protestant organization in North America with continuous service for 382 years.

The current building, named “Marble” for its construction out of solid blocks of marble shipped down river from a quarry at Hastings-on-Hudson, was begun in 1851 and completed in 1854. When it was built the church was outside the city limits so the cast iron fence, still around the church today, was erected to keep cattle out of the churchyard. Marble Collegiate’s bells have tolled the death of every president since Martin Van Buren in 1862. 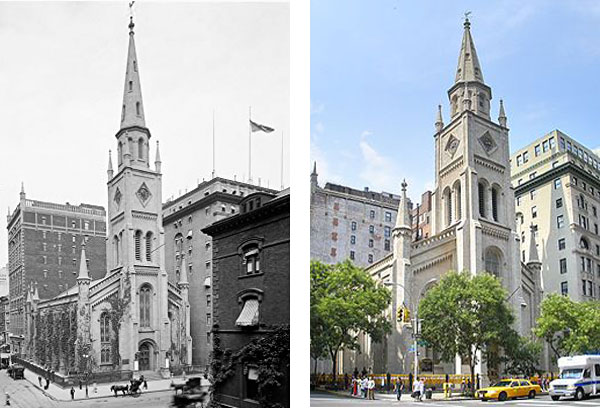 From the middle of the 20th Century until today the church has had a prominent role in the nation’s life. Norman Vincent Peale led the church for 52 years and was one of the most influential religious figures of the 20th Century, authoring 46 books, including the inspirational best-seller, The Power of Positive Thinking.

President Richard M. Nixon was a close friend of Peale’s, he attended Marble Collegiate, and his daughter Julie Nixon married David Eisenhower there in 1968. Pearle was also the reason the Trump family came to Marble Collegiate Church. Peale officiated at the first marriage of Donald to Ivana Trump in 1977. Lucille Ball married her second husband Gary Morton at Marble Collegiate, and Liza Minnelli married her fourth husband David Gest in the church on March 16, 2002 before a star-studded crowd and with Michael Jackson and Elizabeth Taylor as witnesses.

Besides being the first corporation in the country, Marble Collegiate was the first church building in America to install hanging balconies without visible supporting pillars and the first to use closed-circuit color television for overflow worshipers.