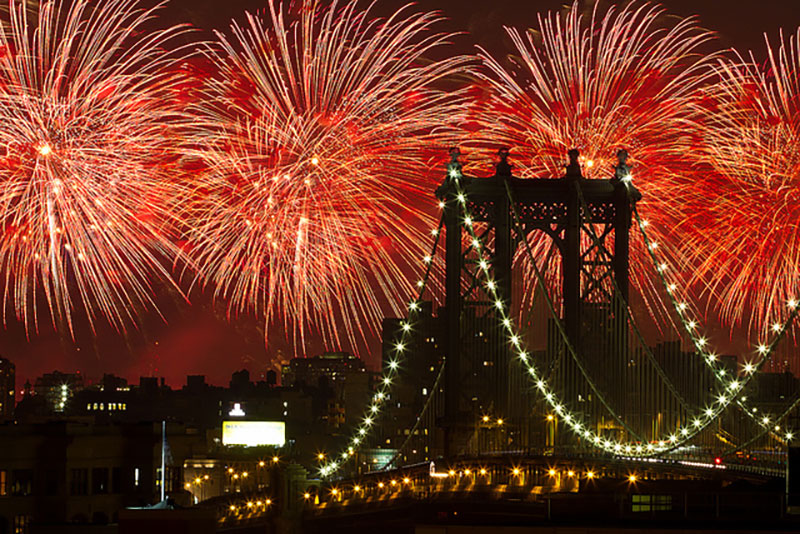 The Fourth of July weekend is coming up! Even though it is a strange time due to the pandemic, there are still plenty of ways to celebrate in New York City. In an effort to balance safety and fun, we have compiled a list of activities to fill your weekend. Whether you’ll be staying at home or enjoying some fresh air, keep these activities in mind to make your fourth weekend special and find some normalcy by celebrating in a traditional way.

This is a Fourth of July classic, whether it is in person or on TV. While the Macy’s fireworks show has been a bit different this year, you have hopefully been able to spot one of the five minor firework displays that have been set off across the five boroughs throughout this week. If not, don’t worry! NBC will be broadcasting the short displays as well as the finale, which will likely be set off from the Empire State Building, on July 4th. Macy’s Firework Spectacular will be broadcast on NBC from 8 p.m. until 10 p.m. on the fourth.  It will include performances by John Legend, Tim McGraw, Amanda Gorman, The Black Eyed Peas, and the Young People’s Chorus of NYC. The broadcast will also include a special salute to frontline workers. Learn more about the broadcast .

2. Grill or Picnic in the Park

The forecast is for  beautiful weather on Saturday and Sunday! This is the perfect time to get outside and have a socially distanced barbeque with friends and family. Whether it is being together with your quarantine buddies or sitting six feet apart from additional friends and family members, you can still enjoy a meal in good company, surrounded by NYC’s beautiful park scenery.

In the case of rain, the live performance of the famous Broadway play, Hamilton, will be released on the Disney Plus streaming service on Friday, July 3rd. If you are looking for ways to learn more about the beginning of our nation, Lin-Manuel Miranda’s brilliant musical is the most entertaining way to do it. From the incredibly talented, primarily black cast to the catchy songs and witty raps, this play is sure to leave you captivated and humming the songs for weeks!

Here are some fun group activities to keep your children engaged.

5. What American Cooking Means to You

America is an amalgamation of cultures, and nowhere is that more true than in New York. As we celebrate our nation’s origins, we should also recognize each person’s own version of what American is to them. One way to do this is through food! Because there is no single “Classic American Dish,” create your own personal “Classic.”  Challenge your friends and family to do the same! Compare your efforts afterwards and explain to each other what meaning the dishes have had for you and your family.  A great idea for a pot-luck, socially distanced get together, or a progressive outdoor picnic.

There are plenty of outdoor yard games that could be a leisure activity to accompany your barbeque, or as my family likes to make it, an intense competition with brackets, scoreboards, winners, and prizes. Cornhole is a family favorite backyard game, played just with two boards and some bean bags! If you’re not familiar with the game, check out the rules here.

Up for an arts and crafts mission as well? You could sew your own bean bags and paint your cornhole boards. If you’re bored and feeling extra ambitious, you could even try making your own cornhole boards from scratch.

Whether you have a fire pit you can use, want to roast your marshmallows over the stove burner, or feel like trying a s’mores dip recipe, this classic Fourth of July treat never disappoints!

We Should Also Celebrate by Remembering and Learning

As we celebrate this year, we should be especially aware that July 4, 1776 did not mean independence for all.  On July 4, 1776, delegates from the 13 colonies adopted the Declaration of Independence. Since then, the day has been annually observed as “Independence Day.” However, for the millions of slaves imported to America before and after this decision, the secession from Britain meant very little in terms of freedom.

Enslaved African Americans were not technically free and independent of an overarching ruler until almost a century later when, on January 1,1863, Abraham Lincoln signed the Emancipation Proclamation. Even then, however, freed slaves continued to be caught in schemes that returned them to similar situations of oppression.  Wider rights didn’t arrive until 100 years later when President Johnson signed the Voting Rights Bill on July 2, 1964, which was the most sweeping civil rights legislation passed by Congress since the post-Civil War Reconstruction era.  The Civil Rights Act prohibited racial discrimination in employment and education and outlawed racial segregation in public places such as schools, buses, parks and swimming pools.

Change has come slowly, and racism continues to be a huge problem. As we enjoy the holiday, let’s take time to commit to the social changes the past few months have made us aware are so necessary.

Books that Illuminate the Black Experience