Independent ad agency Terri & Sandy was founded in 2010 with one goal in mind: To provide a more personable take on the big-agency world. Stepping away from over 20 years of Madison Avenue experience, founders Terri Meyer and Sandy Greenberg have created a company dedicated to hard work and strong client relationships. Their years in the industry have prepped them with big agency rigor, but their approach to clients and staff offers a personal touch. The magenta walls and open floor plan of their NoMad office provide the perfect backdrop to positive company culture and teamwork.

“Clients say that when they walk in, they just think it feels really good in here,” says agency co-founder Terri Meyer. “People really like coming to work.” 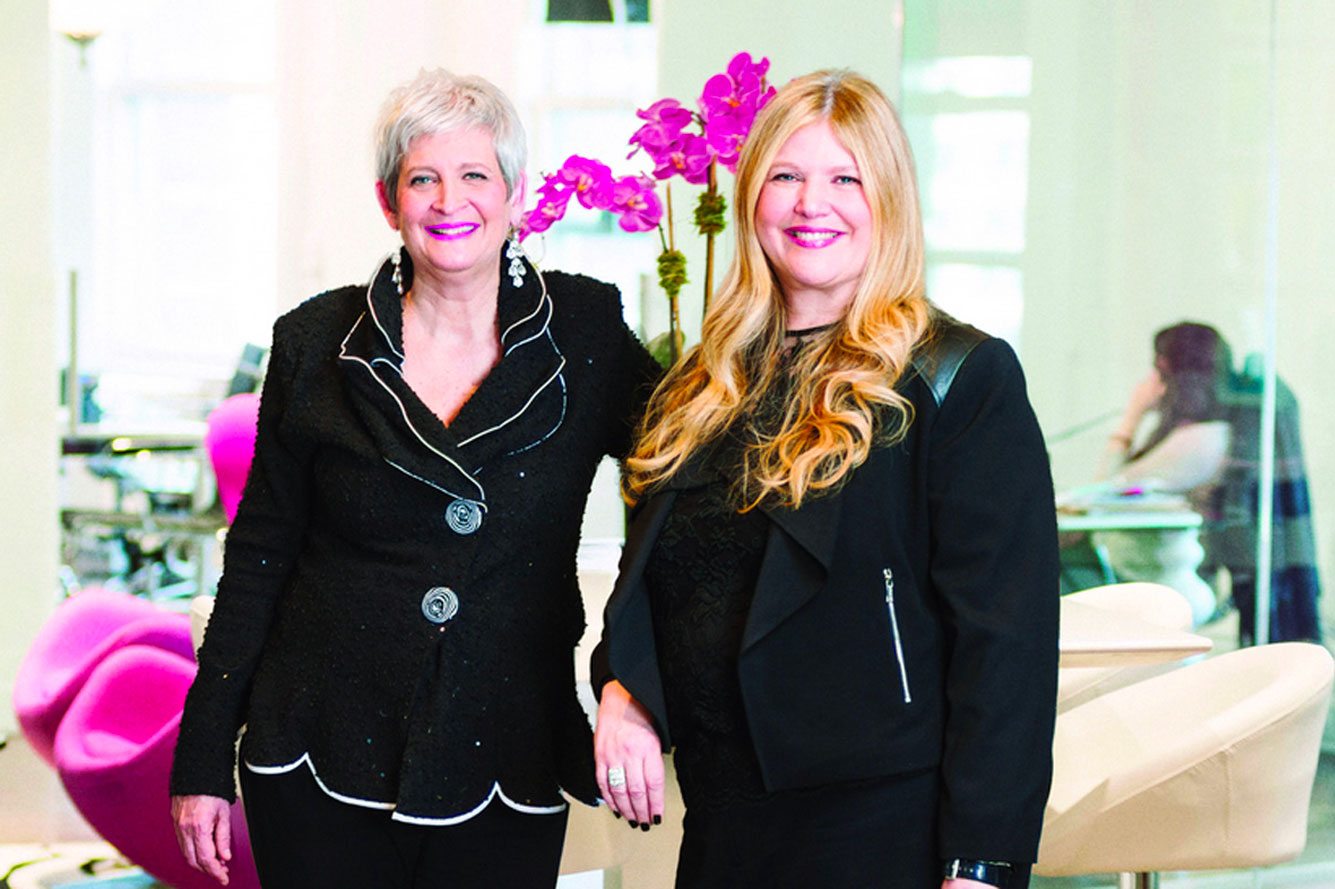 The welcoming nature of the company’s image does not distract from their ability to deliver results. Recipient of Ad Age’s Small Agency of the Year Award in 2017, Terri & Sandy went from $8 million to $13.6 million in revenue between 2015 and 2016, and about $19 million by the end of 2017. Their clients include names like Gerber, Disney, Peeps, Avon, and People, and their work has been featured on CNN, Conan, The View, Today, Fox News, Access Hollywood, and TBS Funniest Commercials. It is clear that while this woman-owned company keeps a staff of just under 50 employees, the scope of their accomplishments is anything but small.

Having teamed up early in their careers, Meyer and Greenberg had already experienced great success together before opening their own firm.  The pair worked at different times with industry giants such as Mars, Kraft, Campbell’s, Nestlé, Oreo and Time, Inc., among others. But gradually they began to feel a lack of compatibility within the walls of the large company where they worked.

“Clients had been telling us for a long time that we should go off on our own,” Meyer says. “We sort of had an agency within an agency.  We had our group, we had our businesses, and we had our clients.”

The final push to start their own company came during the recession, when Meyer and Goldberg felt they could no longer do right by their clients in their current situation. “There were so many politics in the big agency world,” says Meyer. “Some creative directors would just kill stuff because they could, not because there was a reason to.”

The result: Terri & Sandy was formed in 2010 on Terri’s living room couch. Since those early beginnings, the company staff has grown by nearly 500%, and eight years later, five of the original seven employees are still with the agency.

“Everybody takes pride in their piece of what they do,” Meyer says. “Cultures are created from the top, and I would have to say we don’t have any politics, which is a miracle.”

The key to Terri & Sandy’s success, Meyer believes, is in the relationships the agency has with clients. “Every client here today, with the exception of one,” she says, “came from a prior relationship. When you have mutual success with people, they know that they will have it again.”

This special relationship differs from big agencies, because Meyer and Greenberg are the final decision makers behind every advertisement the company creates. “One of our promises is when you buy Terri & Sandy, you get Terri & Sandy,” Meyer said. “We laugh because the president of a big agency may come by once a year to grab a ham sandwich at a meeting.”

However, don’t be deceived by the company’s small size; for being a relatively small fish in a huge ad-agency pond, this agency definitely knows how to make waves. Terri & Sandy’s creative teams are behind some of the most heartwarming and effective campaigns on television, radio, social media and print—from putting FreshPet on the map to revitalizing the iconic Gerber baby brand for the Millennial generation. When People magazine — struggling to reconnect with readers in a day of instant online communication — approached them, the team launched a social media campaign that exceeded every benchmark and turned the magazine’s sales around. And last June, when Terri & Sandy were tasked with shaking up Avon’s image, their hugely successful “Boss Life” campaign breathed new life into the brand with its message of women empowerment through entrepreneurship.

With its current clientele, Terri & Sandy chooses to focus only on projects that align with the firm’s collective mission and values. “Clearly everyone wants to make money,” Meyer says, “but it is not the bottom line. We say ‘no’ to things if we do not feel like they are right for us.”

While Terri & Sandy is incredibly busy meeting the needs of high paying clients, it is perhaps most proud of the social work it’s done such as that for “Strands for Trans,” a nonprofit initiative working to provide transgender people with a safe salon to get haircuts. “We met all of these trans people, and their stories were similar,” says Meyer. “There was no safe place to go. They never felt comfortable having anyone touch their hair.”

The agency partnered with JP Gomez of the famous men’s salon Barba to start the nationwide initiative. The campaign began with a video advertisement.   “We did a video that was barber shop poles,” Meyer explained, “and it has a track going over it with all of these news stories about how trans people don’t feel comfortable.  At the end, we change the colors of the barber shop pole to pink, blue and white – the colors of the trans flag.”

For Pride Week, Terri & Sandy came up with the idea to dye hair with the colors of the trans flag. “We did a video of all the people with their hair dyed to show support,” Meyer said.  “Marc Jacobs, the fashion designer, got involved.  He came in to get his hair colored, and he did a video. We got so much press.”

Since the campaign, over 150 salons across the nation have signed on to Strands for Trans and  have placed a sticker in their window, letting transgender clients know they have found a safe place.  “We have five more states to go, and we will have the whole country,” Meyer said.  “So many people donated their time, which is the most meaningful thing.”

The Future of Independent Agencies

While Terri & Sandy may be working with a smaller staff than the big firms on Madison Avenue, its successful track record and returning clientele demonstrate that the future of advertising may very well lie within independent agencies.

“I think people are getting sick of being in the big agency world,” Meyer said.  “Employees are not treated well, and clients are sick of not getting personal attention. We have pitched against the best agencies in the world and won — sometimes twice.”