Arthur Brounet, who painted the mural in the lobby of 1133 Broadway, was a leading “decorator,” as he styled himself, of the Gilded Age.

In 1896 when he painted the St. James mural, he was about 28.  Ten years later, in 1899, Brounet moved from 678 Lexington Avenue to the St. James, where he was to remain almost to the end of his life, changing rooms several times.  Perhaps it was the mural itself that first brought him to the building.

Brounet had arrived in New York from Le Havre, France in 1888 at the age of 20.  He was married with three children, who later helped in his business, and he owned his own home uptown in the Bronx or Yonkers.   The New York Times announced his death at 75 on February 28, 1941.

We don’t know much more about his life or have an image of him.  Brounet’s life was defined by his work, and luckily there is a lot of information about his creations.

It is important to remember that Brounet wasn’t only a muralist, but a decorator, and he was a “decorator” of choice for major architects.  He was particularly in demand for theatres, office and civic buildings, banks, and fine homes, among others.  As is true of The St. James mural, his work was sought after because it fit so well with Neo-Classical architecture in vogue at the turn of the 19th/20th Centuries.  His projects were as diverse as decorating the Riverside Drive chateau of Charles M. Schwab among other residences, many play and movie theatres, and even a splendid courthouse.

We have copies (not ideal) of two ads Brounet placed for his work.  They do show rough outlines of his residential projects and indicate his business as including: mural paintings, furniture and cabinet work, draperies and upholstering. 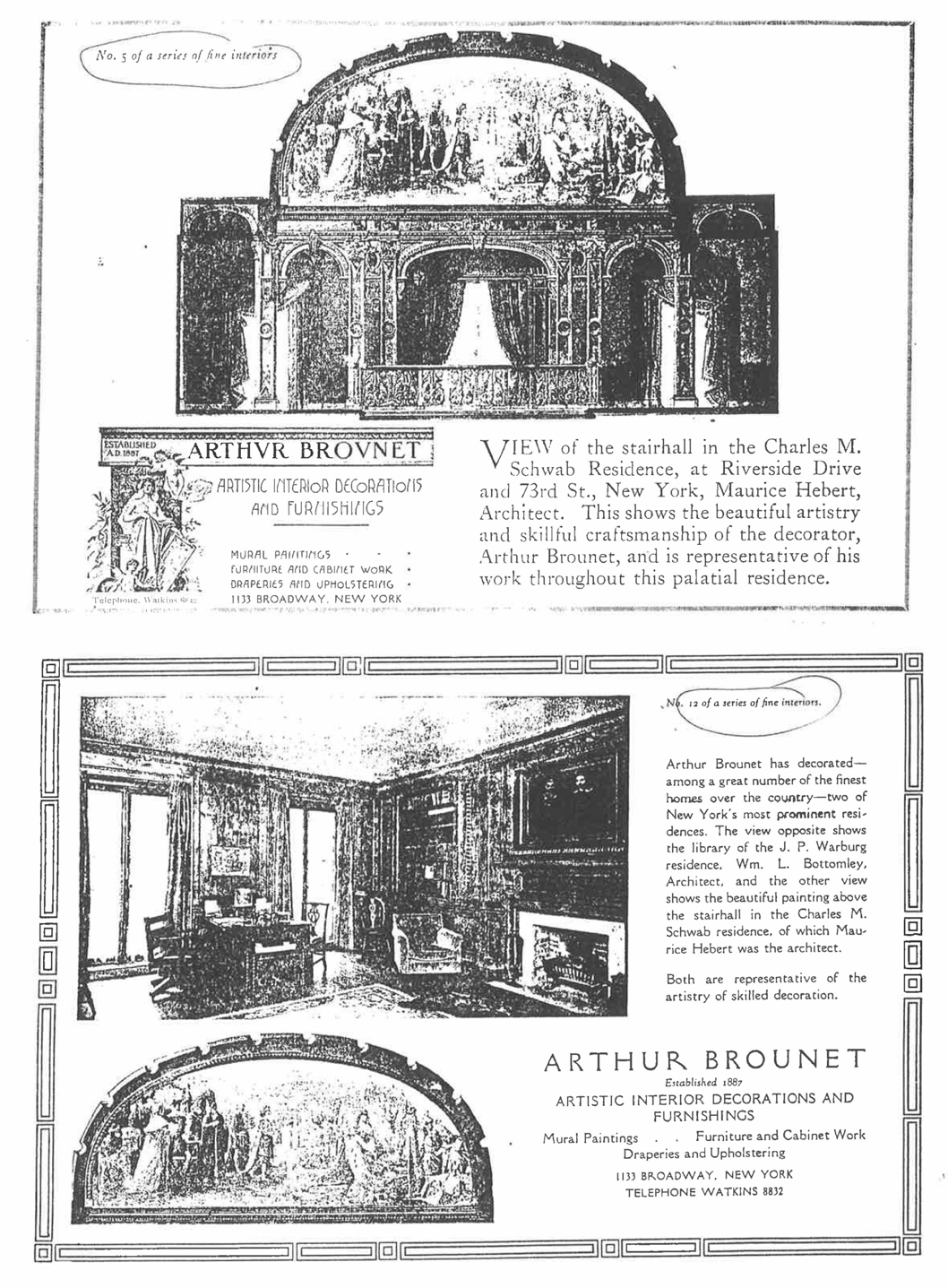 Unfortunately, many of the theatres and homes he designed and provided murals for have disappeared over the past 100 years, but some sterling examples survive.

In New York City, besides the St. James mural, there is the Brounet mural in the lobby of the AMC Movie Theatre on 42nd Street.  You may recall this theatre was moved over several lots on 42nd Street on March 1, 1998 during the redevelopment of Time Square (yes, the entire theatre).  It is putatively the theatre where Abbott and Costello first met and teamed up.  Originally known as the Eltinge Theatre, it was designed by master architect Thomas W. Lamb who hired Brounet to create murals for the lobby and auditorium in the “Egyptian” style, likely as a result of their great success working together on the huge 2,267-seat City Theatre on 14th Street (now lost).

Additionally, right here in New York, Brounet decorated the interiors of the Selwyn and Cort Theaters in Eighteenth Century French style. and he decorated theatres throughout Brooklyn, New Jersey, Maryland and Pennsylvania.

Should you ever find yourself in Richmond, Virginia or Wilkes-Barre, Pennsylvania you might want to see the wonderful examples of Brounet’s work that these small cities still assiduously preserve.

Perhaps the greatest trove of Brounet’s extant work is at the beautiful and recently restored Byrd Theatre in Richmond. 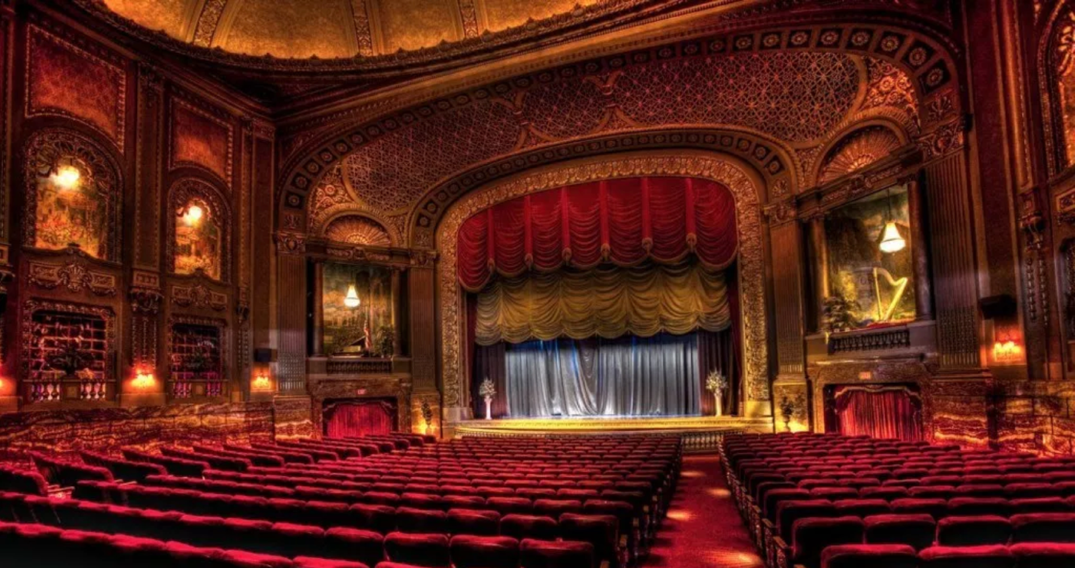 Incredible as it may seem today the Byrd Theatre opened as a movie house in 1928, and the interior decoration was executed by Brounet’s studio in New York.  There are eleven paintings by Brounet in the theatre (six within the arches in the side walls, two in the front boxes, and three in the foyer), and all are wondrously preserved. 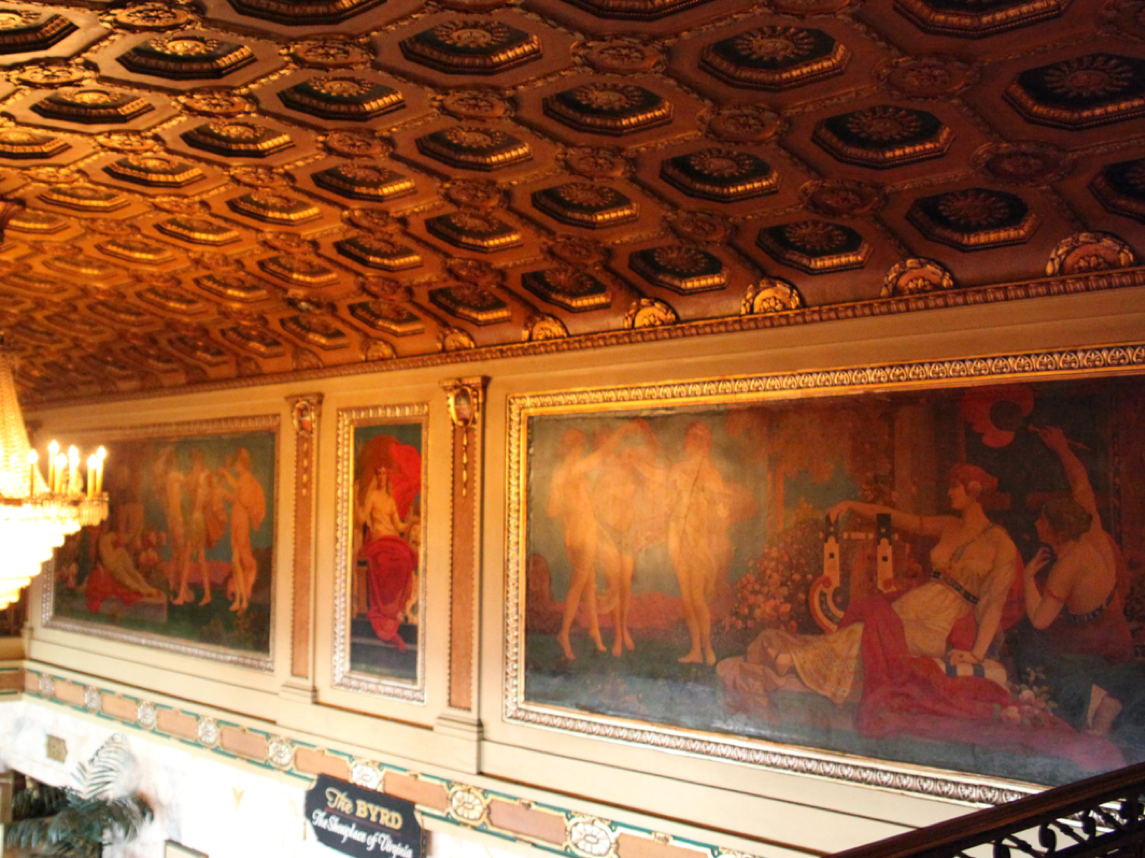 An article on the Urban Scale Richmond website notes that the color scheme of the theatre was also created by Brounet and the murals “undoubtedly” painted by him on canvas in New York and shipped to the theatre.  All of the paintings use classical allegories that reference aspects of the drama and fine arts.

Despite Brounet’s interest in the classics, his work here has moved from the strictly classical forms in the St. James mural of 1896 closer to the Neoclassical models of the early 20th Century, which were gaining in popularity when the theatre opened.  In addition to the major murals, there are small cartouches and panels around the auditorium by Brounet’s Studio, continuing the theme of the dance begun in the lobby. The Byrd is a cohesive composition, with the murals, cartouches, relief decorations and fixtures by other artists complimenting each other to create a harmonious whole. 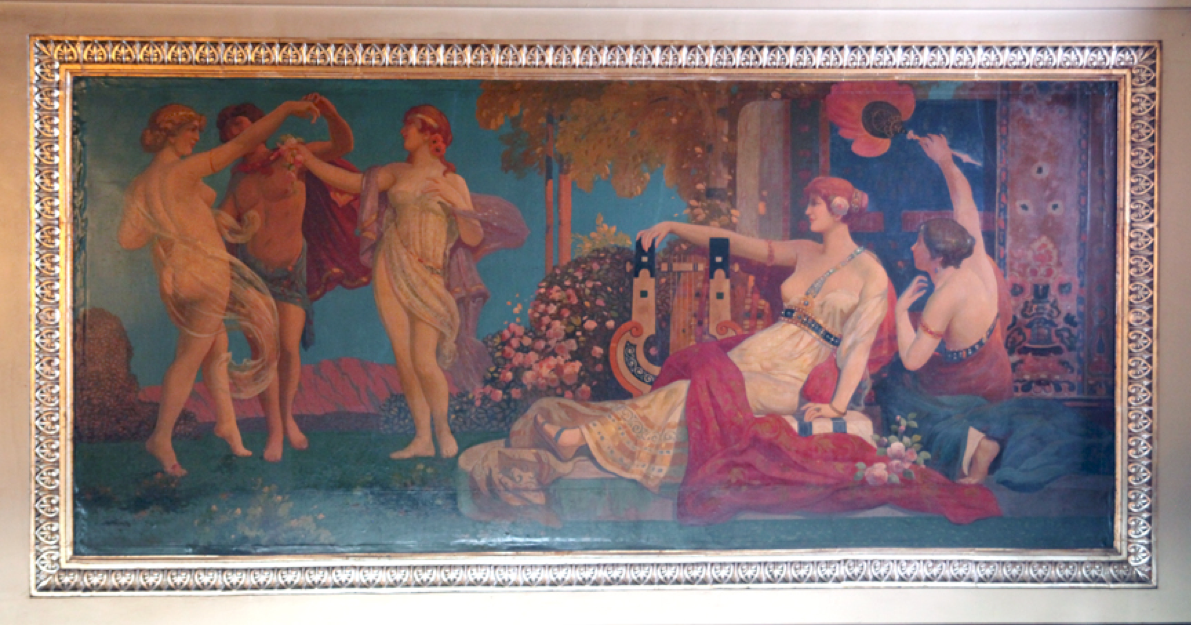 The majestic Luzerne County Court House designed by McCormick & French is found in the relatively small rural town Wilkes-Barre in Pennsylvania. This jewel, also recently refurbished, is filled with fine decorative art throughout, but “The Diamond City” three-panel foyer ceiling, as well as the schemes for the Commissioner’s office, several other offices, and Courtroom 1 were all by Brounet. All of these design works follow his pattern for high symbolism and Neo-Classical forms.