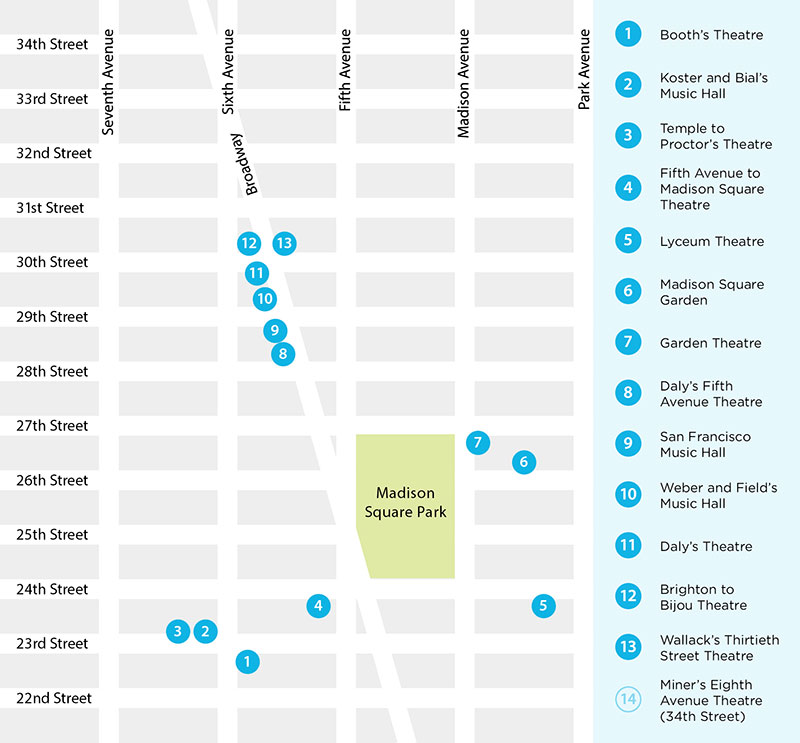 From approximately 1869 until 1910, our neighborhood was New York City’s Theatre District. There were at least 14 theatre locations nearby—but many theatres were renamed, reopened, and/or rebuilt in the same location, so the actual number depends on how one counts. Our staff counted at least 29 differently named theatres, but the histories of many theatres are not complete so there may have been at least twice as many during these years.

Theatre owners and producers came to NoMad during the Gilded Age because of the proximate subway lines, grand hotels and leading restaurants.  Sounds a bit like our neighborhood today.

Impresarios such as Steele MacKaye, Augustin Daly, Lester Wallach, and Harry Miner dominated the scene, while actors such as Edwin Booth, putatively the greatest Shakespearean actor of the 19th Century, Sarah Bernhardt, and Eleonora Dusa wowed audiences. New plays premiered that are still popular today, including classics such as The Pirates of Penzance, The Mikado and H.M.S. Pinafore all by Gilbert and Sullivan and all of which opened to hugely favorable public and critical reaction.

Adding to the excitement were the startling new inventions by the likes of Thomas Edison that appeared during this time, changing the theatre-going experience forever (read more).

In fact, it was the very presence of the Theatre District in our neighborhood that propelled the rise of Tin Pan Alley on 28th Street between Fifth and Sixth Avenues  The music from those shows feeding the publishers, and the publishers hawking their songs in the local theatres.

Sadly, not one of these theatres remain today.  As the city’s wealthy moved their residences uptown, the social center drifted North.  After 50 years in NoMad, the Theatre District followed, moving on to Longacre Square, now named Times Square.  Regardless, it is undeniable that our streets have a historical and exuberant past that, in many ways, echoes the present day character of NoMad.